What I Thought of The Hunger Games (Movie Review)

SPOILER ALERT: You've been warned. I don't discuss the plot in depth, but key points are mentioned as well as a few movie moments. 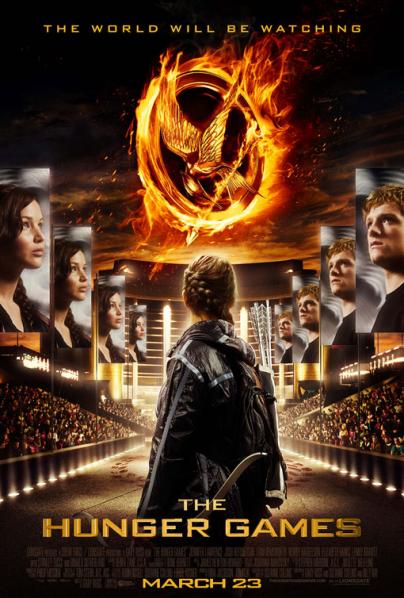 You guys, I saw The Hunger Games movie twice. Me and my sister went to the midnight opening, then the next day went again with my mom. I tried sort of half-heartedly to avoid reading any actual reviews of the film before seeing it because I wanted to form my own opinion as much as I could. If you want your movie-seeing experience unspoiled by reviews, maybe don't read this post. Otherwise, here's my "review" of The Hunger Games movie. (Bear with me, please, as I'm really not used to writing movie reviews.)

First off, the movie follows the book really incredibly well. There are definitely some changes in small things (like how Katniss gets the Mockingjay pin and whose idea it is for her and Peeta to hold hands during the parade in the Capitol) and certain scenes/lines that I loved didn't make it to the movie. But that's to be expected, really, and what the movie gets right is so huge. It gets the important parts, the pivotal scenes and events that happen. Certain scenes are added to the movie that lay the groundwork for the rest of the series really well, without it being exactly as it was in the book. Because we're outside of Katniss' mind and don't know exactly what she's thinking/feeling at all times (although Jennifer Lawrence does an amazing job of just totally becoming Katniss and showing her emotions through facial expressions and movement) the scope of the movie was broader, but also certain things had to play out differently. The "seeds" for things that will be important later are planted well in the movie.

The essence of the book is carried over into the movie. It gives you basically the same feeling as the book did and director Gary Ross does an amazing job of showing just enough glamor and spectacle of the Capitol to suck you in before reminding you in startling ways that this is a terrible, horrible, gruesome "game" that everyone is caught up in. Caeser Flickerman in particular is a pivotal part of the movie in this regard and his talk-show-style segments throughout the movie really help to explain what's happening, I think, especially if you're someone who hasn't read the books and might not know, for instance, how deadly the tracker jackers are.

And the cast of this movie? You guys, they nailed it. Seriously. Jennifer Lawrence was amazing, as was Josh Hutcherson as Peeta, Elizabeth Banks as Effie, Woody Harrelson as Haymitch. Everyone was just stellar. I wished there had been a bit more Gale in the movie, but Liam Whatshisface (I'm too lazy to look up his last name) did such a good job with the few scenes he had. However, apart from the acting itself there were a few issues I had with the characters, specifically Gale and Peeta. Gale I actually liked more in the movie, and I think it's because his overwhelming anger was really downplayed. He was portrayed instead as Katniss' best friend and the person who was looking after Prim once she was gone. It was very much a protector role, stripped of the angry undertones that are there throughout the books. And about Peeta. You guys, I love Peeta. He's one of my all-time favorite characters. And I really like the actor who plays him in the movie; I think he did an awesome, awesome job. He nailed it. But Peeta's character was missing a bit of his Peeta-ness here. His humor and toughness is downplayed, making him seem a little bit generic. (And, if I'm going to be totally honest and a little nit-picky, there was that one line that made him legit sound like a stalker.)

The atmosphere of the movie -- the Capitol, District 12, the arena -- were all so great. The reaping scene in particular -- which was one of my favorites in the book -- is just perfect. The movie did such a good job capturing the fear, desperation, and agony of what's happening. Other important scenes, like Peeta's interview, are also done really well but for me nothing in the movie beats that reaping scene. It's incredible.

As I said, there were some things (certain lines and scenes) that I loved in the book and wish had made it into the movie. The ending in particular seems to speed by really quickly and I wish there'd been just a little more meat to what happens after, but at already nearly two and a half hours long, I can imagine how hard it must have been to keep everything that was great in the books. It's just impossible and the movie does a remarkable job of capturing the things that are most important to the overall story and plot. I'm honestly amazed at how true to the story and characters, especially Katniss, the movie remained. The movie is not the book. It approaches the story from a slightly different angle, a broader scope since we're no longer in Katniss' head. This is an adaptation of the book but even more so, I think, a widening of the story's world. Nothing will replace the book and, really, nothing can touch it, but the movie comes close. The movie really is one of the strongest book-to-movie translations I've seen and while bits of it are disappointing, it's definitely a worthy movie version of one of my favorite books.
Posted by Jordyn at 12:01 AM