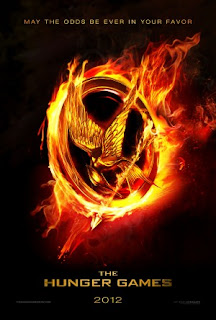 SPOILER ALERT!!!!
IF YOU HAVEN'T READ/FINISHED THE HUNGER GAMES YET, DON'T READ THIS POST. SPOILERS, AHOY!

These aren't exactly my favorite things/moments/scenes from the book, but instead the top ten things I'm looking forward to seeing interpreted in the movie. (But yeah, there's definitely lots of overlap between this list and my favorite book moments.)

In the books, it was the moment that Katniss volunteered in place of her sister that really got me hooked. The emotions she has in that moment, the oh god not my little sister, not her, anyone but her, were so authentic and painful and real that it just immediately sucked me in.

2. Peeta's Interview:
There are a couple of things I love in stories and one of them is when a key character is missing out on a key piece of information. This is probably part of why I love Katniss and Peeta's early relationship so much. The scene where Peeta gives his pre-Games interview is also so full of emotion, but also the rippling effects of shock. It's a total game changer for Katniss and everyone else.

3. The Muttations:
Alright, these things terrify me. It's not so much that I want to see them as that I'm completely intrigued about how the movie is going to pull this off. If they're half as scary as the mutts in my mind I'll have nightmares for weeks, so I hope they're not.

4. The Clothes:
I can't believe I just wrote that. I usually don't pay much/any attention to clothes in movies and television (and life!), but the outfits Cinna designs for Katniss play such a big role in how she's perceived and are described so incredibly well that I can't wait to see the interpretation.

5. The Nightlock:
The end of the Games, with the nightlock berries, is definitely one of the biggest scenes in the book and I can't wait to see how it plays out onscreen.

6. The End:
Until I reread The Hunger Games recently, I'd forgotten just how much happens in that brief time between the end of the Games and the end of the book. It ends with Katniss and Peeta very much at odds and Katniss' safety very much at stake. I'm wondering how the movie is going to play this; if they'll end it at the same place that the book does, or if it'll end with at some other place, like with the nightlock scene.

7. The Setting(s):
I'm really looking forward to seeing the filmmakers' interpretation of the settings of this book, especially District 12 and the Capitol (less so the arena, because I figure that pretty much just looks like outdoors and wilderness).

8. People Watching The Games:
Gale and Prim especially. In the book we don't get much in the way of what the viewers think except for what Katniss imagines others might be thinking/feeling about the situation, but from everything I've heard the movie's going to be a bit different in this regard. I'm really looking forward to seeing the reactions of those Katniss loves most as they see what plays out onscreen.

9. Effie:
Okay, I know. She's part of the Capitol -- a willing helper in the tragedy of the Games. And yet... and yet I can't help but like Effie. She can't really be so oblivious, but she often seems like she is and like, in spite of the part she plays, she really does care for Katniss and Peeta. I'm looking forward to everything that includes her.

10. How the Violence is Handled:
I'm really not a fan of violence. It's part of the reason I resisted reading this series for so long. I'm looking forward to seeing how this violence plays out onscreen, especially considering how dedicated the director and others involved were to keeping it as a PG-13 movie.

So, what are you most looking forward to seeing in the movie?
Posted by Jordyn at 12:01 AM