This week I reread the entire Peaches series. I expected it to take much longer than one week, but I got really caught up in the characters and the ongoing story. Write-ups of my rereading adventures will be posted later this month but for now I'm really excited about reading something new. (Also, I can't for the life of me get these book images to be in order, but it goes Peaches; The Secrets of Peaches; and then Love and Peaches. In other words: orange, purple, green.)

It's sort of a miracle: this week I managed to only add one book to my wishlist, and then that was only because MacMillan sent me their fall catalog and this just looked so right up my alley: a story about a girl running a secret advice column. Win. (Okay, total honestly? A big part of why this appeals to me so much is all about that one Lizzie McGuire episode where Lizzie was the newspaper advice girl.) Okay but also, I went into Barnes & Noble this week and saw all these books that I've had on my list for practically ever that are out now. The Selection; Second Chance Summer; When You Were Mine. I really had to restrain myself, and even then I walked out of the store with one book (see below).

I bought this one! This!!! The sequel to Stupid Fast, which I loved! Plus, Stupid Fast won the YA Fiction Cybils last year and I WAS ONE OF THE JUDGES and THE CYBILS IS MENTIONED ON THE BACK OF NOTHING SPECIAL. I mean, look at this picture that I took of the back of the book. I don't know if it's too small for you to read, but it has a line about the Cybils Award, which makes me happy both because Stupid Fast is awesome and because I was lucky enough to be one of the judges. 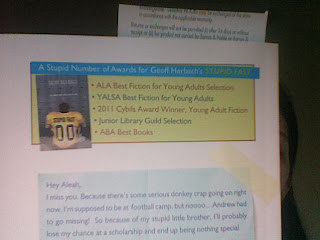 BOOK NEWS
This Is What Happy Looks Like, by Jennifer E. Smith, is set to come out next year (so far away!) but I love that it's billed as a sort of You've Got Mail-style story. This makes me happy.

Destroy Me, by Tahereh Mafi, is set to come out as an e-novella October of this year. According to this video it bridges the gap between Shatter Me and the second book (Unravel Me) and is told from Warner's POV. I'm super un-excited about reading Warner's POV and I probably won't even read it because I don't understand how anyone could possibly like Warner he's just an awful killer I'm really worried that Juliette might fall for him or something and I don't want that to happen and I could go on longer about this but I won't. But I thought I should mention the book because I did, after all, superlove Shatter Me.

You still have time to enter the Terra McVoy giveaway (ALL OF HER BOOKS!!!!). I'll be randomly choosing a winner this coming Thursday.
Posted by Jordyn at 12:01 AM

Email ThisBlogThis!Share to TwitterShare to FacebookShare to Pinterest
Labels: all the books